No longer do you need to imagine. It is here and it’s called Russian Roulette.

This effect was created by Alan Rorrison and has been the most requested effect we have ever released.

The Rundown:
So at this point you might be asking yourself: “Are these guys insane? Does this use a real gun with live rounds?”

No. This effect is the magician’s version of the Russian roulette. It uses no guns at all. In fact it uses just the most basic of props: 3 Styrofoam cups and a big scary nail. (Other “safe” methods are taught where there is no need for a nail or any dangerous item)

The Performance
The Magician presents 3 cups and a very sharp nail. He tells the spectator that he may choose any of the 3 cups to put over the nail, and once the nail is covered he should mix the cups around so there is no way for the Magician to know where the nail might be. This happens as the Magician’s back is turned.

Now, the Magician turns back around and proceeds to dramatically play “Russian roulette” smashing each cup as hard as he can. With each cup the danger grows, one mistake and he’ll have a nail right through his hand. With a twist ending, the Magician ends up safe and unharmed having chosen the correct cup.

WARNING: This effect is extremely dangerous

There are no reviews yet. 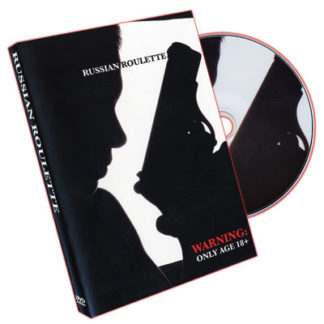