A multi-talented writer, comedian, and television host, Rick Bronson is the go-to guy, the consultant for, and the confidant of some of Canada’s finest magicians. The Tourist, a television series he created, hosted and co-wrote, is now a hit in 22 countries, and his recent national comedy special, Comedy Now Presents Rick Bronson, was among the highest rated in Canadian history! This book, Rick’s first, contains a choice selection of magic from his stand-up act., and a handful of close-up miracles from his apres-show repertoire!

And so much more! Seven by Rick Bronson is the third installment in the critically acclaimed Seven By Series, and exciting, eclectic collection of stage and close-up magic from the mind and repertoire of a world-class entertainer! Written by David Acer, illustrated by Joey Incollingo.

There are no reviews yet. 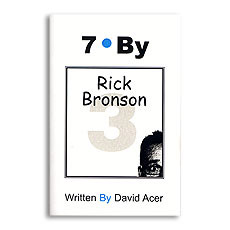